What a beautiful day! The sun beckoned this morning so I forgot about any paperwork and headed outside to enjoy. You just can’t pass up sunny January days sitting inside. I decided to follow Sunshine Coast Tourism‘s suggestion for #52weeksoftrails by heading to week #1 Francis Point Provincial Park.

Francis Point is located in Pender Harbour…about 45 minutes from Arcturus Retreat. Well worth the drive! I’ve never taken the time to hike here before and I was pleasantly surprised. A perfect way to spend 15 minutes or an hour. A place for clearing your head and just taking in the view.

The entire park is along the Malaspina Strait in the Pacific Ocean and the sound of waves crashing on the ancient granite rocks is a soothing constant. This is easy hiking (not a cardio day) although hiking on the rocks makes for an uneven surface in places. There are 2 trails in the park. Either way, you start your journey here in front of a beautiful bay. Waves were crashing in the distance and I thought, “Love to see that up close”. Sure enough, the trail hugs the coastline and before I knew it I was getting a great view of crashing waves on huge granite boulders. Choosing to start left takes you down the longer trail that probably took 20 minutes to the surprise lighthouse at the end. Hard to say on time though…I just kept taking pictures and enjoying the view.

Rocky Pacific coastline is a sure sign to find arbutus trees. These are the coolest trees. They keep their leaves all year and shed their bark instead. It leaves a perfectly smooth orange texture that you won’t find anywhere else. These trees grow right out of the boulders where it is hard to imagine how any tree could take root.

Circling back to my original starting point, I found the short trail that goes right. Just when I thought I wasn’t going to get any cardio for the day, I found the 50 or so steps that lead to an amazing viewpoint. So worth the burst of energy! I’ll definitely be back to enjoy these views. It would be very interesting to see it in different seasons…but I imagine it is always picture perfect when the sun shines bright. 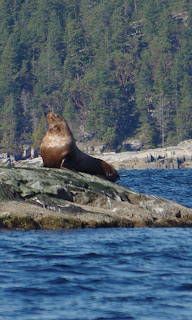 Today was one of those perfect “spring is almost here” days. Bright sunshine without a cloud in sight makes you feel so good after you’ve finished a wet & gray west coast winter. It is hard to explain having grown up in the prairies where a big sky is available most of the time. Sunshine Coasters are just happier and ready to give the sun a big hug when it returns to the sky.

I had the pleasure of escorting visitors on an afternoon exploration of Pender Harbour. After a lovely lunch of potato & corn soup & ham & cheese quiche & checking out the fabulous nature inspired art on display at Copper Sky, we took a short walk over to the docks. There we met up with Bryce Christie of Sunshine Coast Tours who had the boat ready and waiting.
I joked with Bryce as we headed out that we were hoping for a little wildlife adventure. I never dreamed what we would see. Soon we were cruising up to this small rocky island and something was moving. Isn’t this photo amazing! This sea lion was massive! Easily 1,000 pounds and he was just basking in the glory of the sunshine. Bryce cut the engines and carefully guided us quietly in for photos and stunning amazement & appreciation. We could have watched for hours, but this male sea lion would have none of it and waddled his way back into the ocean where he quickly disappeared. Bryce explained the sea lions visit the Sunshine Coast this time of year as they migrate along the Pacific Coast. We also saw 2 seals during the trip who were out for a swim. After seeing the massive sea lion, the resident harbour seals just seamed tiny. 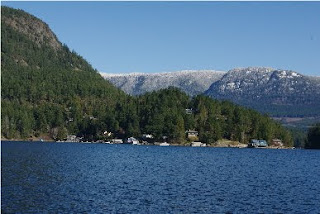 It is often said that the way to truly experience Pender Harbour is to do so in a boat. This is so true. The beautiful harbour, well protected from the large waves of the ocean has drawn people for centuries. This was once the winter home for large numbers of the Sechelt (shishalh) Nation. What a beautiful place to gather, fish, and support each other in community through the winter. We viewed two different sites along the cliff faces where pictographs documenting the original residents could be seen.
This photo is as we first left the dock with Mount Daniel to the left and snow covered mountains in the background. The sharp contrast of the deep blue water, the green forest covered landscape, the bright orange trunks of the arbutus trees, and the snow covered peaks is just heaven to me. We explored Pender Harbour itself and then headed into the Agamemnon Channel which separates the Sechelt Peninsula from Nelson Island. We could see snow covered Churchill Peak and others that line Jervis Inlet on the way to Princess Louisa Inlet to the north. It is hard to put into words. I just sit in awe of this absolute gem…nature at its best, full of life and striking contrasts. Even the pictures can’t compare to the 360 view up close and personal. (Thank goodness Bryce shared these photos with me, as I managed to leave my camera at home!) I must remember to take more days to get out and appreciate the sights rather than work too hard in front of the computer.