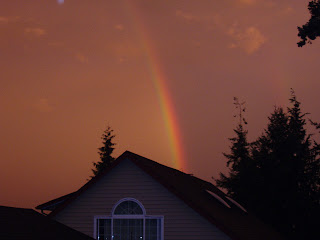 Mother Nature is just amazing. Tonight we were treated to a fabulous display of lightning and beautiful rainbows. Now for many people, this is a common occurance. However, on the south coast of British Columbia we don’t see lightning very often….and especially not over an hour of both cloud to cloud and cloud to ground snake lightning.

Things got started about 9pm which is 45 minutes before sunset. The storms were to the east over the North Shore Mountains so while watching lightning displays in 1 direction, the sun was shining with clear skies to the west. The result was this fabulous rainbow which the pictures just don’t show the real effect. I could only get a shot of the rainbow base…it was a full arc with the entire shape in sight out over Howe Sound. At times it was a double rainbow in full grandeur. As the sun set, the sky became a wild shade of red as the storm built.

Once the sun was down, the storm really kicked in. Major lightning display across the entire horizen for a full hour. While it was only sprinkling here, the rain was so heavy over the water that I could no longer see the mountains. Eventually it poured here as well which was wonderful after months of unseasonal dry weather. 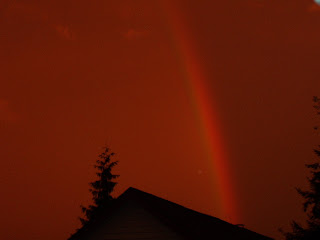 I only hope the lightning didn’t spark any wildfires. The forest is extremely dry and there are major fires in other parts of the province.